A new study released by the Journal of the American Medical Association on Thursday found that cardiomyopathy, or “Broken Heart Syndrome,” has increased during the coronavirus pandemic.

Conducted by researchers at the Cleveland Clinic in two Ohio hospitals, the study examined 1,914 patients from five distinct two-month periods — 250 of which had been hospitalized in March and April — who presented Acute Coronary Syndrome. They compared those patients to others who had shown similar problems across four timelines during the course of the last two years.

THE MYSTERIOUS CONNECTION BETWEEN THE CORONAVIRUS AND THE HEART

The study found the incidence of stress cardiomyopathy, or Takotsubo Syndrome, increased by a significant 7.8 percent during the pandemic’s initial apex, compared with prepandemic incidences that ranged from 1.5 percent to 1.8 percent. The findings suggest that psychological, social and economic stress related to the coronavirus are associated with the increase. 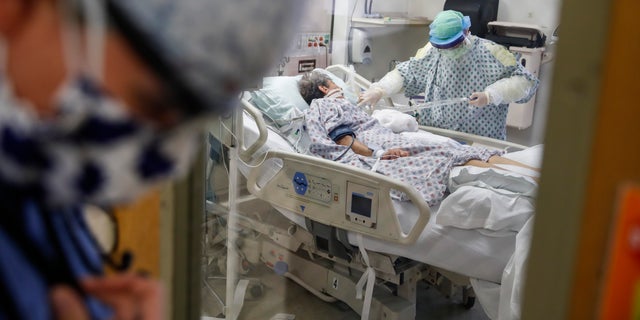 FILE – In this April 20, 2020, file photo, resident physician Leslie Bottrell stands outside a room at an Intensive Care Unit as a nurse suctions the lungs of a COVID-19 patient at St. Joseph’s Hospital in Yonkers, N.Y. A U.S. government report says death rates are 12 times higher for coronavirus patients with chronic illnesses than for others who become infected. The Centers for Disease Control and Prevention report Monday, June 15 highlights the dangers posed by these conditions. They include heart disease, diabetes and chronic lung ailments, such as asthma or emphysema. (AP Photo/John Minchillo, File)

Japanese scientists first identified Takotsubo Syndrome in 1990. While the causes of the condition are not yet fully understood, physicians believe a person’s reaction to unexpected stressful events can cause a release of stress hormones that temporarily reduce the heart’s ability to pump — causing it to contract less efficiently or irregularly.

“The association between stress cardiomyopathy and increasing levels of stress and anxiety has long been established,” the report’s authors wrote. “The psychological, social, and economic distress accompanying the pandemic, rather than direct viral involvement and sequelae of the infection, are more likely factors associated with the increase in stress cardiomyopathy cases. This was further supported by negative COVID-19 testing results in all patients diagnosed with stress cardiomyopathy in the study group.”

This said, the researchers also noted some limitations to their study, including that their patient sample solely represented the population of Northeast Ohio.

“The results should be interpreted with caution when applied to other states or countries,” they said. “Further research must examine the association of COVID-19 with the incidence of stress cardiomyopathy and study any temporal or regional differences.”

In addition, they noted it was “plausible” patients with heart problems had chosen to avoid visiting hospitals amid the pandemic.

Since the pandemic began, health officials have warned about the impact of coronavirus on mental health.

“The impact of the pandemic on people’s mental health is already extremely concerning,” World https://bt-hypnotise.com/ Organization Director-General Dr. Tedros Adhanom Ghebreyesus wrote in a May United Nations policy brief. “Social isolation, fear of contagion, and loss of family members is compounded by the distress caused by loss of income and often employment.”

According to the National Center for https://bt-hypnotise.com/ Statistics and U.S. Census Bureau’s Household Pulse Survey, an estimated 23.5 percent of Americans reported feeling symptoms of depressive disorder between April 23 and May 5. That figure rose to 25.1 percent between June 11 and June 16.