The feline’s infection was confirmed following tests at the Animal and Plant Health Agency (APHA) laboratory in Weybridge, England, on July 22, according to a press release from the UK government.

The government said the cat was “the first confirmed case of an animal infection with the coronavirus strain in the UK.” It said there was no evidence the cat had transmitted the virus to its owners.

“All available evidence suggests that the cat contracted the coronavirus from its owners who had previously tested positive for Covid-19,” the press release added.

The cat was initially diagnosed by a private vet with feline herpes virus — a common respiratory infection among cats — but was also tested for SARS-CoV-2 as part of a research program. Follow-up testing at the APHA laboratory confirmed the cat had SARS-CoV-2, which manifests as Covid-19 in humans.

Chief Veterinary Officer Christine Middlemiss called it a “very rare event” with “infected animals detected to date only showing mild clinical signs and recovering within in a few days.”

Yvonne Doyle, the medical director for Public Health England, said it was “not a cause for alarm,” adding that there was “no evidence that pets can transmit the disease to humans.” 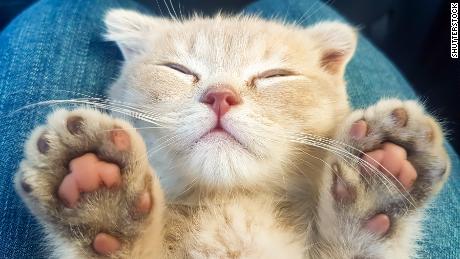 That’s a view shared by other animal health experts.

“It has been clear for a while that cats are susceptible to infection, but there is no evidence that they can go on to infect humans,” said James Wood, head of the department of veterinary medicine at the University of Cambridge, adding that only a handful of pets “have been found to be infected around the world.”

“The data overall continue to suggest that cats may become infected by their owners if their owners have Covid-19, but there is no suggestion that they may transmit it to owners. This reflects the advice that if possible, when infected, owners should keep their cats inside,” he said.

There have been reports of pet cats and dogs testing positive for coronavirus in New York, Hong Kong and the Netherlands.

Covid-19 was found in three of the eleven cats living on a mink farm in the Netherlands.
Eight big cats also tested positive for the virus at New York’s Bronx Zoo.