A conservative coronavirus-denier is urging others to take the virus seriously after 14 members of his family were infected and one died when he threw a party to celebrate the birth of a grandchild.

Tony Green, a 43-year-old from Dallas, and his partner, threw the party on June 13 for more than a dozen family members including father-in-law Rafael Ceja, his partner’s grandmother and sisters.

Masks were not worn during the event, which was thrown to celebrate the birth of a grandchild, with Green explaining he believed coronavirus was a ‘hoax.’

But within days of the gathering, 14 family members, including Green and the parents of the newborn baby, had fallen ill with coronavirus. 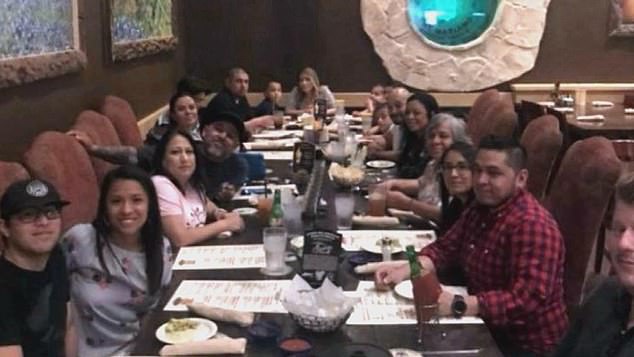 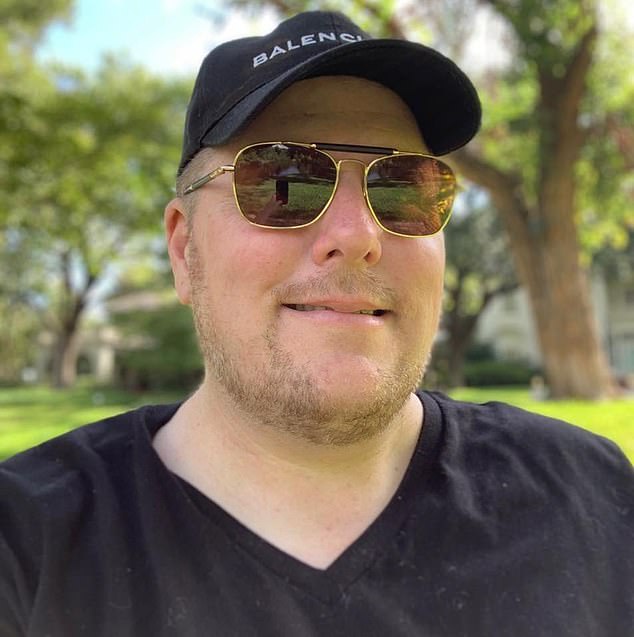 Tony Green, from Dallas, threw the party with his partner (pictured), and invited the in-laws after months of social distancing

Green would not identify the 14 victims but said they included two of Ceja’s sisters, one of his nephews and a brother-in-law.

His decision to go public about the outbreak in the family has caused a rift.

‘You cannot imagine the guilt I feel, knowing that I hosted the gathering that led to so much suffering,’ Green, a gay conservative wrote in a Dallas Voice op-ed where he urged others to take the virus seriously.

Green said he voted for President Trump and was skeptical about COVID-19 until his family was affected.

‘I admit I voted for Donald Trump in 2016. I admit traveling deep into the conspiracy trap over COVID-19,’ Green wrote. ‘All the defiant behavior of Trump’s more radical and rowdy cult followers, I participated in it. I was a hard-a** that stood up for my “God-given rights.”‘

‘In great haste, I began prognosticating the alphabet soup about this “scamdemic.” I believed the virus to be a hoax,’ he added. ‘I believed the mainstream media and the Democrats were using it to create panic, crash the economy and destroy Trump’s chances at re-election.’

The Trump supporter said he first became concerned after the party when he woke up feeling unwell, and by June 15, his partner and parents had all fallen sick as well. 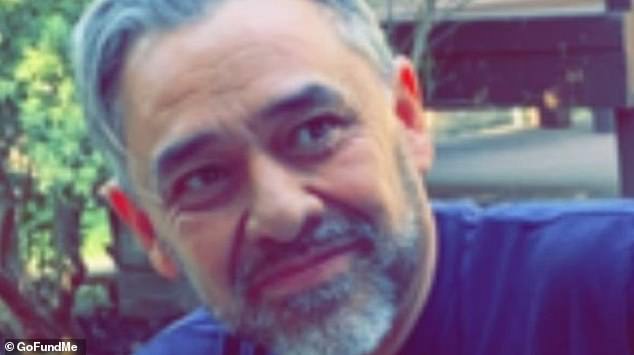 While the downward trend in cases is prominent in the hotspot states of Florida, Texas, Arizona and California, 22 other states are currently seeing an increase in new infections

‘The pain and trauma that was yet to come is more than anybody could have prepared for,’ Green wrote on a GoFundMe page set up to cover medical costs.

Green is gay and isn’t married but he considers his partner’s family to be his in-laws who traveled from Dallas to Austin for the gathering at got ill the night their arrived.

Green and his father-in-law, Ceja, were both admitted to hospital on June 24.

Green nearly suffered a stroke after the virus attacked his nervous system.

Between June 17 and 23, Ceja’s mother fell ill and was admitted to hospital where she died on July 1 after suffering from pneumonia caused by the virus.

It was only on July 2 that Governor Greg Abbott made wearing a face mask or covering mandatory in places where 20 people or more are gathered.  Abbott ordered bars to close on June 26 after cases related to drinking venues began to spike.

‘We just felt the worst was behind the country because everything was easy, things were reopening and none of us were experiencing any symptoms,’ Green told NBC News.

Ceja was unaware his mother was in a room next to his, according to Green.

On July 12, Green learned that his father-in-law Ceja had been placed on a life support machine after also suffering from pneumonia.

His mother-in-law, Marisa, called him ‘crying and screaming in terror’ to tell him the bad news. 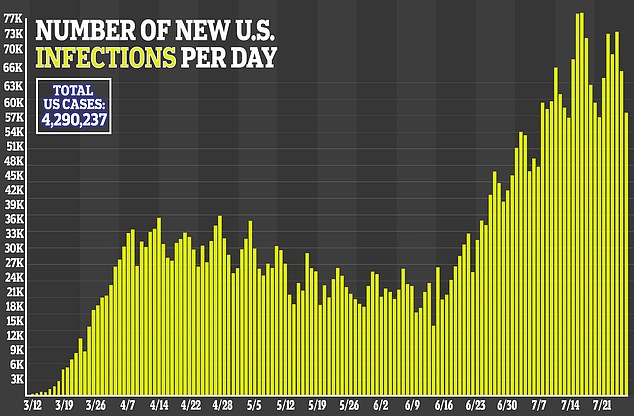 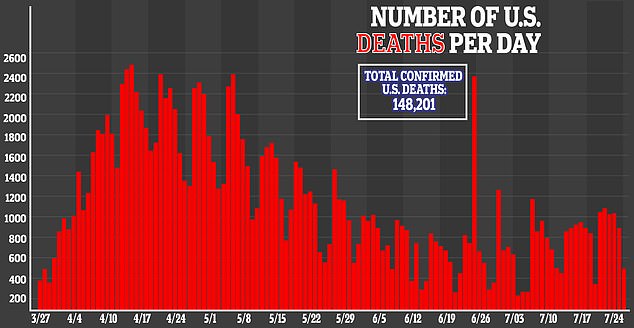 Green said she refused to accepted the more than $7,000 raised on GoFundMe because of other family members’ ‘continuous harassment and vindictive behavior.’

A funeral for Ceja’s mother was held on July 14, with only 10 family members allowed to attend.  The same day five more family members tested positive.

Green said 12 of the 14 who contracted the virus have either recovered or are recovering.

‘For those who deny the virus exists or who downplay its severity, let me assure you: The coronavirus is very real and extremely contagious,’ Green wrote in his op-ed. ‘Before you even know you have it, you’ve passed it along to your friends, family, coworkers and neighbors.’

Green added: ‘You do not want your loved ones suffering and dying from this because you are taking a “political stand” or protecting the economy over their lives.’

New coronavirus cases across the United States have started to decline for the first time in five weeks.

The seven-day average for daily infections this week is now just under 66,000, which is the lowest it has been in 10 days.

Infections have been surging since early June when COVID-19 started spreading in Sunbelt states and the US recorded single daily highs of more than 77,000 cases. 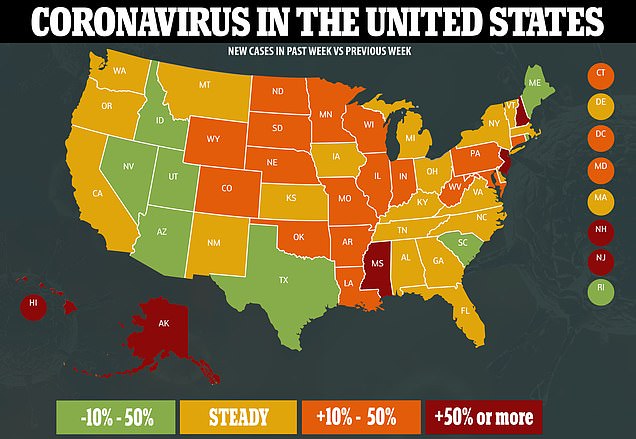 New coronavirus cases across the United States have started to decline for the first time in five weeks. The downward trend in cases is prominent in the hotspot states of Florida, Texas, Arizona and California. But even as cases start to plateau in those hard-hit states, 22 other states – mostly in the Midwest – are currently seeing an increase in new infections

On Monday the Texas Department of State Health Services reported more than 4,000 active cases. In total, there have been 385,923 cases and 5,713 deaths reported in Texas.

While the downward trend in cases is prominent in the hotspot states of Florida, Texas, Arizona and California, 22 other states are currently seeing an increase in new infections.

Cases are mostly rising in the Midwest, which public health officials say is a sign the virus is spreading north from the Sunbelt states.

Infections also surged this week in some Northeastern states, like New Jersey, where infections fell after peaking in April.

Dr Deborah Birx, the head of the White House taskforce, is continuing to urge states with rising infections to close bars, cut back on indoor dining and to mandate face masks.