Your mop can potentially shed light on whether you prefer veggie burgers or cheeseburgers, a new study has suggested.

Researchers from the University of Utah collected discarded hair from barbers and hair salons from 65 cities across the United States. From the chemical traces in the cuttings the scientists found that American diets are dominated by animal-derived protein like meat and dairy.

This type of hair analysis could be a useful tool to assess a community’s dietary patterns and health risks, the researchers said.

“The takeaway here is that we can potentially identify regional, national, and temporal patterns of dietary habits with this approach,” James Ehleringer, lead author of the study and distinguished professor at the University of Utah’s School of Biological Sciences, said in an email.

We eat a lot of meat

How exactly can you determine diet from strands of hair? Variations in carbon isotopes found in hair, Ehleringer said, reflect those found in different food products — either consumed directly or indirectly through animal feed, which in the United States is usually corn.

The study, which published Monday in the journal PNAS, found that animal-derived proteins, such as meat and dairy, accounted for 57% of US diets, on average.

Diets rich in protein, as opposed to plant-based ones, were associated with a greater risk of health problems like heart disease, the study said, citing existing research. 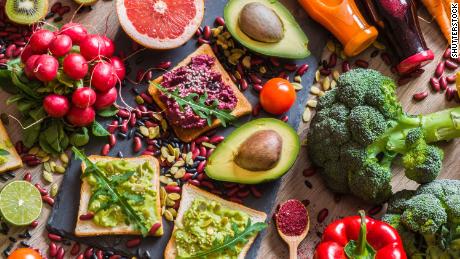 Recent surveys show that at least one-fourth of the children and adults across the United States consume fast foods on a daily basis, the study noted.

The analysis also suggested that the proportion of animal protein that people ate was higher in ZIP codes with a lower socioeconomic status, as measured by cost of living and income information, where protein accounted for as much as 75% of diets.

For Salt Lake City, where the researchers had particularly detailed data in 29 ZIP codes, the study used driver’s license data to calculate trends in body mass index for particular ZIP codes. The authors found that the isotope ratios reflecting a higher proportion of protein in diet were correlated with obesity rates.

There was even an association between the cost of a haircut and the carbon isotopes in hair — with cheaper haircuts in areas where people had a higher proportion of corn-fed protein in their diet.

“We had not imagined that it might be possible to estimate the average cost an individual had paid for their haircut knowing [carbon isotope] values,” the authors wrote.

Barbers and salon owners were supportive of their scientific endeavor, Ehleringer said.

“They would then let us go to the trash bin and pull out a handful or two of hair, which we then sort into identifiable clusters representing individuals.”

Ehleringer has also developed a similar type of hair analysis to trace where a person has been, as a result of the isotopes in the water they drink, with the oxygen and hydrogen isotope ratios in water varying according to geography. It’s a potential tool for crime investigators trying to identify a body or track criminals.

The new study was based on hair from 684 people. The sample size, Ehleringer said, was sufficient to suggest that there is a pattern and more in-depth studies are warranted.

He said the findings were “reinforced in that the same patterns observed across many US states are reflected in the more regional Salt Lake Valley metropolitan region.”

“This measure is not biased by personal recollections, or mis-recollections, that would be reflected in dietary surveys,” he said in a press statement.

“As an integrated, long-term measure of an individual’s diet, the measurement can be used to understand dietary choices among different age groups and different socioeconomic groups.”