A man in his 20s has died of bubonic plague in New Mexico, state health authorities confirmed on Friday.

His death came only a few days after another case of plague, in man in his 60s, became the first diagnosed in the state this year.

The two men lived more than one hundred miles apart, so it’s unlikely the cases are linked, but health officials are now investigating the home and family of the young man that died of the rare infection.

It comes after a squirrel in neighboring Colorado tested positive for Yesinia Pestis bacteria, which causes bubonic plague and reports of a potential outbreak in China. 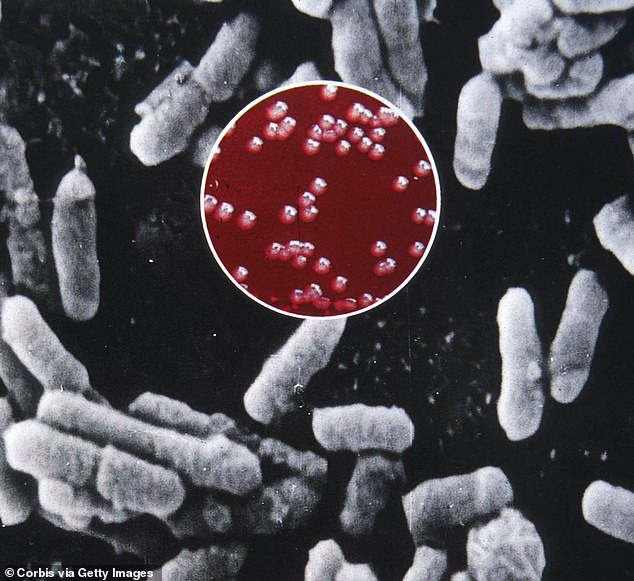 A New Mexico man in his 20s has become the first to die of the plague in the US this year after contracting Yesinia Pestis bacteria (pictured, in red file)

Chinese officials have sealed off a city and a village in the nation’s Inner Mongolia region after reports of bubonic plague deaths there this year.

It’s the same disease that killed about 50 million people – including some 60 percent of Europe’s population – in the 14th Century, earning it the name ‘the Black Death.’

These days, cases of bubonic plague are exceedingly rare, but still highly fatal.

The World Health Organization (WHO) estimates that there are between 1,000 and 2,000 cases of plague globally each year.

Between 30 and 100 percent of those cases prove fatal, according to the WHO.

In the US, there are only about seven cases of plague in a typical year. Only about eight to 10 percent of Americans who catch plague typically die, the Centers for Disease Control and Prevention (CDC) estimate.

WHAT ARE THE THREE TYPES OF PLAGUE?

There are two main forms of plague infection both caused by the same bacteria – Yesinia pestis.

Bubonic plague is the most common form of plague and is spread by the bite of an infected flea. The infection spreads to immune glands called lymph nodes, causing them to become swollen and painful and may progress to open sores. Human-to-human transmission of bubonic plague is rare and it’s usually caught from animals.

If plague infects the lungs – either by the bubonic form progression through the body or by catching the infection from an infected patient or animal’s breath – it is called pneumonic plague.

Pneumonic plague is significantly more deadly and can take hold in as little as 24 hours. Human-to-human spread this way is easy and, if the condition’s not diagnosed and treated quickly, it is often fatal.

Symptoms of both forms of infection include pain the limbs and head, fever, vomiting and weakness. Pneumonic plague also causes coughing and coughing up blood.

Septicaemic plague occurs when the infection spreads to the blood. This is much rarer and can cause the blood to clot around the body – it’s almost always fatal.

If those rodents are bitten by fleas, the bugs can then spread it to their next hosts, including other animals and humans.

Humans can usually carry the plague without symptoms for about two to six days if they’re bitten by an infected flea.

What happens next will depend on whether the person has bubonic plague – the kind responsible for most of the Black Death fatalities, and is marked by very swollen, bulbous lymph nodes often in the groin, armpit or neck – septicemic plague, or pneumonic plague.

The man who died in New Mexico had the septicemic form.

In that case symptoms may appear faster – within one to three days – if they have inhaled infectious droplets from the cough or sneeze of someone else who has the plague.

Most patients first present with a fever and chills and may become extremely weak.

Many will then develop abdominal pain, diarrhea and vomiting and some people will bleed from their mouths, noses or rectums. Blood may be visible pooling the skin.

If the infection is bad enough, it can poison the blood stream, leading to septic shock and potentially gangrene that turns the extremities black as the tissue dies off.

The same thing can happen to organs if they’re overrun with the bacteria, leading to multiple organ failure and death.

Treatment with antibiotics can improve survival odds, but it has to be started quickly in order to work. Patients decline quickly, with some dying within 24 hours of their first symptoms.

Experts advise that the best thing to do about plague is to take every measure possible not get it.

The New Mexico Department of Health warned that pets allowed to roam freely outside – especially if they’re liable to wander to areas with wild animals – are a primary source of infection, and advised keeping animals indoors as much as possible.

The young man’s death is the first plague fatality reported in New Mexico since 2015, and presumably in the US this year.

Although it’s rare anywhere in North America,  cases. most often crop up in New Mexico, Colorado and Arizona.