Prime Minister Benjamin Netanyahu on Tuesday said Israel was readying for another coronavirus vaccination campaign in six months that will include children, after inking new deals with Pfizer and Moderna to buy millions more doses.

“Prepare your shoulders… and kids,” he said during a press conference, predicting COVID-19 vaccines would be approved for use in children by then.

He also warned of possible new coronavirus variants or even “a new virus,” saying there would be no further COVID-19 resurgence if there are no such “surprises.”

Netanyahu’s forecast appeared to based on remarks by Pfizer CEO Albert Bourla, who said last week that he believes a third dose of the company’s vaccine will be necessary “somewhere between 6-12 months” after getting the first two doses, and annually after that. Pfizer has said the vaccine it developed with Germany’s BioNTech remains 91% effective after 6 months. 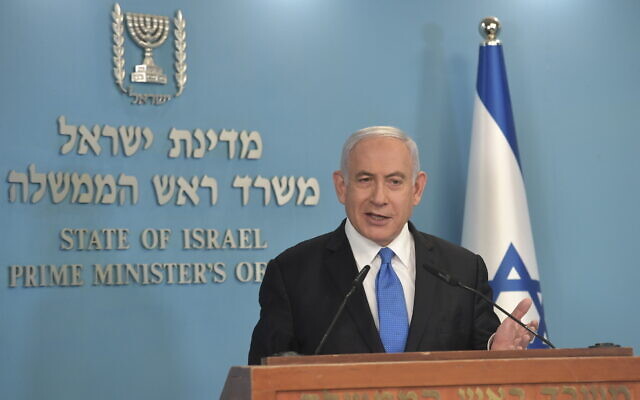 Prime Minister Benjamin Netanyahu speaks during a press conference at his office in Jerusalem on April 20, 2021.(Kobi Gideon/GPO)

The premier’s comments came a day after Israel closed the new supply deals with Pfizer and Moderna. The exact number of doses from each company remains secret, but Hebrew media reports said Israel agreed to pay for a total of 18 million shots from the two American companies, with the option to purchase millions more after those have been used. 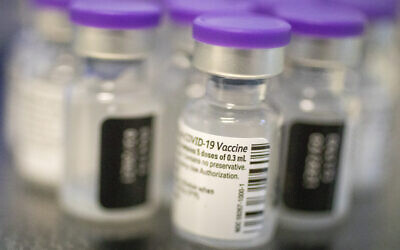 According to the deal, the doses to be supplied will be adapted to the different variants of the virus, if needed.

Israel has yet to give a precise timeline on when vaccines will be authorized for children. Earlier this month, Pfizer asked for authorization to use its COVID-19 vaccine on 12- to 15-year-olds in the United States.

Their request to the Food and Drug Administration in the US came after Phase 3 clinical trials of the Pfizer vaccine in the age group were 100 percent effective in warding off the disease, according to the companies.

The Israeli Pediatric Associated has called for parents and family doctors to vaccinate their children when the Pfizer-BioNTech vaccine is approved for those children. Currently, the vaccine has emergency authorization for use in people 16 and older.

Nearly 5 million Israelis, over half of its total population, have received both doses of the vaccine.

Greetings from the Vaccination Nation

One tiny country has led the world in COVID vaccination. If Israel’s achievement makes you proud, there’s something you should know. Huge audiences have flocked to The Times of Israel recently from countries where Israel normally makes the news only because of its conflicts.

They’ve been coming here to read a very different kind of article. We’ve been the go-to site for everyone intrigued by the success story of the “Vaccination Nation.”

As ToI’s Health and Science correspondent, I’ve written much of this coverage – and it’s been exhilarating to see its impact. Our journalism has inspired many articles in media outlets worldwide. I know this because international journalists have often contacted me for input.

Your support, through The Times of Israel Community, helps us to continue providing surprising, impressive stories from this small state to readers around the world. Will you join our Community today?

Already a member? Sign in to stop seeing this

You’re serious. We appreciate that!

We’re really pleased that you’ve read X Times of Israel articles in the past month.

That’s why we come to work every day – to provide discerning readers like you with must-read coverage of Israel and the Jewish world.

So now we have a request. Unlike other news outlets, we haven’t put up a paywall. But as the journalism we do is costly, we invite readers for whom The Times of Israel has become important to help support our work by joining The Times of Israel Community.

For as little as $6 a month you can help support our quality journalism while enjoying The Times of Israel AD-FREE, as well as accessing exclusive content available only to Times of Israel Community members.

Already a member? Sign in to stop seeing this